Private Banking as a 401k Alternative


401k’s, and IRA’s, have become the traditional investment for most Americans. However, after comparing Infinite Banking to these government sponsored plans, it becomes clear why banking is such a strong substitute. Let’s take a look at these two vehicles side by side.


As you can see, a 401k is going to have some attributes that the private banking system won’t have, such as an employer match and use of pre-tax dollars.
However, there are many qualities of private banking as well. Your money isn’t tied to the markets, so you have no risk of losing money.
Private banking puts you in control of your money. You are free to borrow out dollars and use them for the things you need, such as cars, home repairs, investments, etc.
Also, if treated properly and setup by a professional, your private banking system will never be taxed again. With a 401k, you are taking a chance on future tax regulations.
No matter what you choose, having all the information is the only way you can make an informed decision.
Posted by Stefan Waggoner at 11:09 AM No comments:

The Ideal Banking for All Business Owner

As a business owner you deal with a lot of different issues that make your financial situation unique. A lot of what you save for retirement is money placed right back into the business. The Infinite Banking Concept shows you how to utilize the banking system in your favor, bypassing the need for outside lending sources, and redirecting money normal lost to interest and taxes back to you and your business. It creates the ability to be in complete control, surmounting large amounts of capital to become your own banking institution, creating additional tax advantages and a large retirement fund at the same time. By restructuring the flow of capital in your business you will recover the money you lose in the form of debt, interest, taxes, and opportunity cost.
Posted by Stefan Waggoner at 9:29 PM No comments:

Retirement: Are You Ready

This is a must see for anyone who hopes to retire with out relying on the federal government.
Retirement: Are You Ready
Posted by Stefan Waggoner at 1:52 AM No comments:

Ryan Guina, On Tuesday October 19, 2010, 4:46 pm EDT
One of the positive affects of the recent recession was the general shift from spending to saving. The realization that not all jobs are secure made people think twice about how much they spend, resulting in a higher savings rate than our nation has seen in years. With more attention focused on saving money, it becomes necessary to understand where you should save and how to set savings goals. For most people, there are three types of savings goals: short-term, medium-term, and retirement savings.
[See 10 Costs That Could Increase in Retirement.]
Short-term and intermediate-term savings. Short and intermediate savings are generally used for emergency funds, a down payment on a large ticket item, and similar large expenses. For most short-term and intermediate purchases, a standard savings account or CD ladder should be enough to meet your savings goals. These are great places to save for near-term expenses because you have relatively easy access to your funds and they are FDIC insured. However, the opportunity for growth is almost non-existent when compared to saving in retirement accounts.
Full Story http://finance.yahoo.com/news/Your-401k-is-Not-a-Savings-usnews-2883556153.html?x=0
Contact Waggoner Financial to supercharge your savings in a tax favored environment.
www.waggonerfinancial.com
Posted by Stefan Waggoner at 9:24 AM No comments:

Workers Not Saving Enough to Get 401(k) Match

The majority of Americans are not saving enough in their 401(k) plan to be able to retire comfortably. Almost three quarters of current workers are not on track to replace 70 percent of their pre-retirement income at age 65 using their 401(k) plan and Social Security if the markets perform typically, according to a recent Financial Engines report. The analysis of over 2.8 million 401(k) participants at 272 employers found that the typical 401(k) participant is projected to be able to replace only 55 percent of his or her pre-retirement income.

Waggoner Financial has solutions for this problem
Posted by Stefan Waggoner at 10:13 AM No comments:

Is a Roth IRA Safe From Taxes?

Congress wouldn't tax Roth IRAs, would it?
It is a burning question for thousands of taxpayers now deciding whether to pay taxes to convert their regular individual retirement accounts to Roth accounts. All taxpayers are eligible to make the switch, because this year the income limit of $100,000 was permanently repealed. Many have done so already: Fidelity Investments says that as of May 31, the firm had handled 87,000 Roth conversions this year, about four times the number for the same period last year.

Read more: Is a Roth IRA Safe From Taxes? - Personal Finance - Taxes - SmartMoney.com http://www.smartmoney.com/personal-finance/taxes/is-a-roth-ira-safe-from-taxes/#ixzz12kqrfTae
Waggoner Financial has solutions to protect against unnecessary wealth transfers from your IRA
waggonerfinancial.com
Posted by Stefan Waggoner at 4:17 PM No comments: 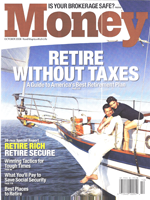 COVER STORY
RETIRE WITHOUT TAXES
Suppose you could earn tax-free returns on your retirement savings. Suppose you could collect tax-free income after you quit working — and even pass along these tax-free payouts to your heirs. You'd jump at that trifecta, right? Then why haven't you? With a Roth IRA and its workplace counterpart, the Roth 401(k), you can get all three valuable benefits in one investment. But what's holding you back could be confusion. Roths present you with a minefield of eligibility requirements, tricky tax twists and arcane withdrawal rules. That's where MONEY's guide comes in. Their 12 questions and answers will tell you everything you need to know to make a Roth the cornerstone of a rich, secure retirement.
go to  http://waggonerfinancial.com/calculators.html  to compare a ROTH vs 401k
Posted by Stefan Waggoner at 11:04 AM No comments: